Can the private and public sector collaborate

Last year, OCASI’s Positive Spaces Initiative approached Erica Whyte, a futurist with a background in design thinking and business development, to co-create a campaign designed to inform interactions between service providers on LGBTQIA+ immigrants and refugees living in Ontario.

The Ontario Council of Agencies Serving Immigrants (OCASI) is designed to serve 235 membership in a number of ways. OCASI not only advocates to the provincial and federal government on how to better support the immigrant and refugee serving sector, but also through its efforts in collaborating across the province to identify service-gaps, and add capacity to the settlement sector to better equip service providers to support service-users with unique and complex needs.

The Positive Spaces Initiative was formed in 2008 and will be celebrating 10 years of PSI this upcoming fiscal year. It was formed in collaboration with the lesbian, gay bisexual and transgender community, the immigrant/refugee-serving community, and with queer and transgender newcomers themselves.At the heart of the Positive Spaces Initiative, we are looking to recognize and affirm the lived experiences of Queer and Trans immigrants/refugees and newcomers who often are integral, though often invisible parts of our communities, as a result often face barriers in accessing equitable services. Our mission is to acknowledge and celebrate the rich gender and sexual diversity that exists within our communities in a way that centers newcomer voices.

In celebration of this, The Positive Spaces Initiative will begin with the launch of their “Together” campaign. We were happy to interview Erica and get her thoughts on creating a platform for these voices and experiences.Erica describes her design strategy a bit deeper:

The Positive Space Initiative does an amazing job at creating communication that challenges the status quo and barriers to public services. I believe the work we produced together truly carries that through.This work and the design choices made, are meant to center immigrant and refugee voices. Refugee voices here include more than just public sector service-providers and service-users, who bare the burden of creating a positive space for each unique individual seeking care.

After synthesizing our combined research,through a series of focus groups we developed renderings that took into account a variety of prominent themes.The three postcards developed are made to model specific language needs of service-providers and service-users. Encoded in each postcard are a set of symbols that are used to express dynamics that exist between both LGBTQIA+ immigrants and refugees and those working to support them. The final product are scenarios that agencies and organizations can use as a resource in their day-to-day to open dialogue, activate listening and encourage body language between the LGBTQIA+ newcomer community and beyond.

For the poster, we relied heavily on form and colour to capture attention of viewers. Palette wise the poster draws on the iconic release of the refugee flag at the 2016 Olympics. The word ‘Together’ or ‘Ensemble’ is than used as messaging meant to insight action and emphasize the effort that all participants have to endure. The words then flow and cascade into an illustration that play with viewers imagination. This illustration is of two fragmented figures that make one complete composition. The figures depicted are an emblem meant to represent a complex portrait; the wide spectrum of bodies that engage, on a daily basis in these systems and environments.

Again, OCASI serves 235 membership in a number of ways. As a departure question I ask, how can private products and services work together with public services, to include immigrant and refugee voices? 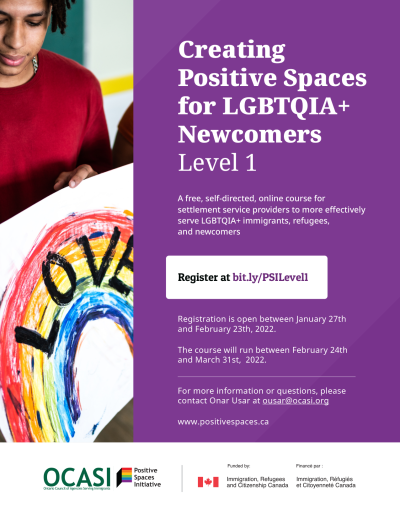 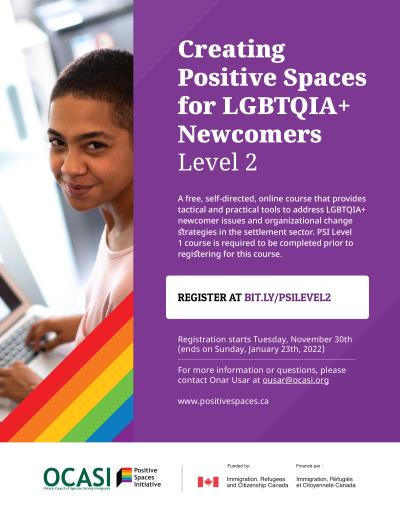 PSI is hiring a Part-time Coordinator!